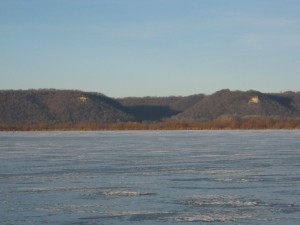 Photo taken the day after a white Christmas as morning sun makes shadows play on the stark bluffs below Brownsville, Minnesota. On this day it would become very windy causing the angler who took this photo to head to shore even before settling into the routine of finding a fresh meal to take home. The four inches of black ice sits atop water clear enough to allow pentration of sun and shadows all the way to the bottom. Already cautious fish were made all the more jumpy by the shadows of flapping shanty parts and the crunch of ice cleats. That’s another way of saying fishing was tough on this outing. A fisherman in the distance was seen racing back and forth from his perch on his bucket to one of his tip-ups. landed two northerns, one that looked to be around 30 imches. Some other fishermen were catching an occasional blue gill, but all was pretty quiet on this day. An Amish gentleman on skates held an umbrella up to the wind and skimmed across the ice for a good distance until the wind became so strong it made him lose his balance. 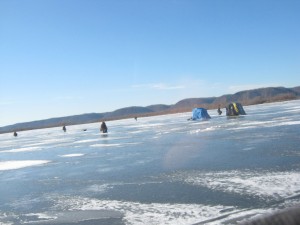 That skater can be seen behind the shanties in the photo above pausing to adjust his umbrella. Ice fishing this year has remained limited after several frigid nights left up to 4 inches of ice on places relatively sheltered from wind and current, followed by mild daytime temperatures. Most fisherman are content to remain in shallower water areas in this part of the river.