Genoa NFH staff collected female washboard mussels last October in the Mississippi River near Prairie du Chien. The washboard population there had spawned several weeks prior to our collection visit, and we were able to collect female mussels who brooding mature larvae (glochidia) in their gills. Washboard females don’t hold their viable glochidia for a particularly long time, so the females were brought straight back to the lab and kept in clean, translucent, flow-through tanks so we could watch for the natural release of their glochidia. 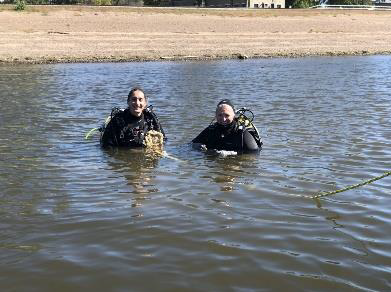 Scuba diving in the UMR to collect gravid female mussels, including the washboard mussels that were used for juvenile production in early 2022. Photo credit: Erica Rasmussen/USFWS. 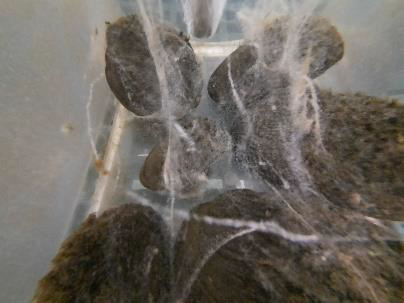 Within a few days of laboratory observation (and slightly warmer temperatures in the mussel building vs the Mississippi River in October), several females released wispy, cobweb-like mucus nets containing viable glochidia. In the river, these webs and strands drift up into the current from the female, ready to ‘catch’ unsuspecting fish. When a fish swims through the web, the glochidia in the mucus strands brush by the fish, and snap shut when they encounter fish tissue. Some of these glochidia will attach to the gills of the correct host fish (channel catfish, black bullhead, and green sunfish) and successfully transform into juvenile mussels, though many will fail to attach to any fish, and others will attach to a non-host and be sloughed as the fish’s immune system protects the fish.

While glochidia in the wild have a relatively low likelihood of attaching to the correct fish type, this step of the mussel reproductive cycle is something we can greatly improve in the laboratory- collected glochidia are checked for viability and added to a tub of known host fish -channel catfish- greatly increasing successful attachment and transformation of the glochidia into juvenile mussels. Host fish that have glochidia encysted on the gills are kept in the mussel building over winter at natural surface water temperatures, these cold conditions keep the glochidia from developing too quickly so they remain encapsulated in the fish’s gills until the spring. As temperatures naturally warm, or the fish are moved to heated culture systems, the glochidia continue their metamorphosis into juvenile mussels. When fully developed, they break free from the fish’s gill and drop into the water, settling on the bottom of the culture tank where they can be collected and moved to juvenile mussel culture systems.

The first juvenile washboard produced from last October’s production were collected in February. As juveniles are collected, they’re placed in sediment trays for grow-out. These sediment trays- boxes with clean sediment, aerated well water, and an algae/diatom mussel food mixture- are monitored and fed daily to keep the juvenile mussels happy and healthy. Some of these produced juveniles have been sent to partner agencies for research uses, and others will be cultured this spring and summer (and beyond) for population augmentation in local rivers. By: Beth Glidewell 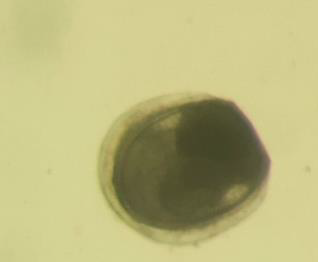 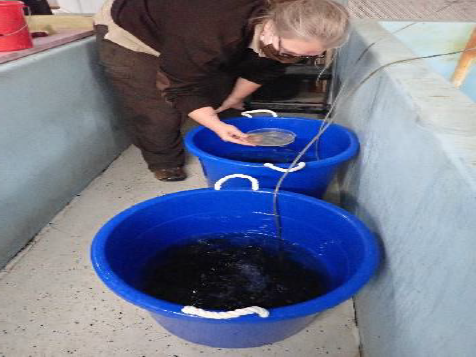 Megan adding glochidia to tubs of catfish, greatly increasing the likelihood of connection between an individual glochidium and a target host fish. Photo credit: Beth Glidewell/USFWS