The end of the summer growing season is a busy time for the mussel program. As water temperatures begin to drop, propagated juvenile mussels that have spent the summer in various outdoor culture locations are collected and brought back to the mussel building to over-winter. Culture locations have been selected to provide the juvenile mussels a diverse, natural food base (river water) in a secure location (Dubuque’s Ice Harbor, in partnership with the National Mississippi River Museum and Aquarium, and Blackhawk Park, in partnership with the Corps of Engineers). After a summer of growth, mussels are collected, counted, cleaned, and measured. Individuals that have added sufficient growth over the summer are tagged and released at the end of the fall, others over-winter in rearing pans in the mussel building.  This summer, juvenile mussels were placed supsys (Suspended Upwelling SYStems) and newly transformed juveniles dropped off fish in cages in the Ice Harbor. Cages were pulled out of the water, cleaned and sorted by a wonderful group of volunteers, River Museum staff, Iowa DNR staff, and USFWS colleagues. Just over 2000 juvenile Higgins Eye mussels were recovered from the sandy substrate in the cages. Pictures of this event were featured on the River Museum’s social media pages, and on Genoa’s Facebook page. Supsys have been maintained all season by River Museum staff and student volunteers and will be end-of-season processed and returned to GNFH in October. 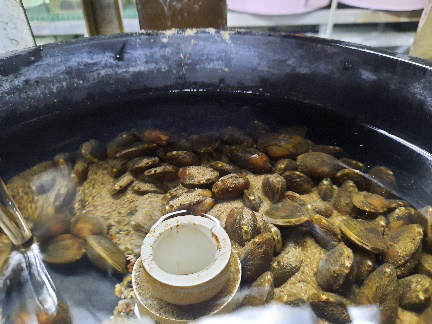 Juvenile Higgins Eye that spent the summer in the MARS trailer are now settled into their winter housing in the mussel building. Photo: Beth Glidewell/USFWS.

Many thousands of newly transformed juvenile mussels and older juveniles of 9 species spent the summer in the MARS (Mobile Aquatic Rearing System) trailer at Blackhawk Park. These juveniles are being counted, measured, and returned to the mussel building throughout the fall. A couple of very dedicated volunteers joined GNFH and other USFWS staff in the processing and counting of cages placed in Pond 14 at the hatchery. This was the 3rd year of an experiment evaluating polyculture methods and pond management. This year’s experiment did not yield any newly transformed juvenile mussels, though about 1000 older Fatmucket juveniles survived and grew to sufficient size in the pond that they can be tagged and released this fall. By: Beth Glidewell 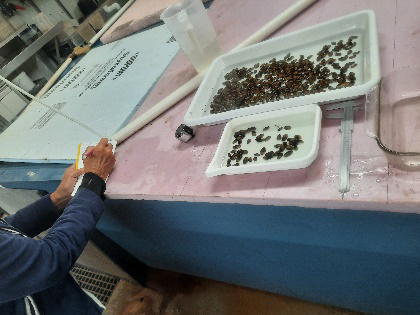