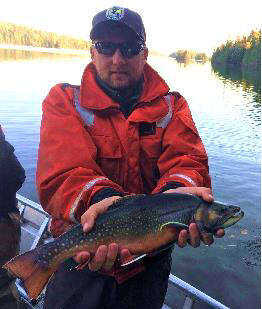 The newest additions to Genoa National Fish Hatchery arrived on station in January. About 50,000 fertilized Brook Trout eggs were sent from our sister hatchery at Iron River. Hatching began almost immediately upon arrival in mid-January and all the fry were hatched out by the end of January. Staff have been busy caring for the eggs and fry ever since. These fish will live in the safety of the quarantine building until they have passed multiple fish health inspections. The treatment system in place in the Quarantine Building will keep the rest of the hatchery protected from any pathogens until we can ensure that there are none, at which point we can move them to a bigger rearing space. Once these fish are big enough to ensure a high survival rate in the wild, they will be stocked into the Lake Superior basin to help boost populations of Coaster Brook Trout.
The story behind the origin of these new arrivals begins in October of 2017. Eggs were collected from remnant populations of Coaster Brook Trout from the Isle Royal area and raised at Genoa NFH. This process was repeated the following year, and another batch grew up in the hallowed raceways of Genoa NFH. These fish weren’t destined for the wild, however. These two lots were destined for the FWS broodstock program and were sent back to Iron River NFH. Fast forward to 2021 and holding two distinct lots of broodstock that were becoming sexually mature, staff at Iron river NFH were able to cross them with minimal likelihood of relatedness between parents. These little guys will grow up in the same raceways their parents did, but they are destined to ultimately help grow the population along the shores of Lake Superior so Americans can enjoy them for generations to come.
By: Nick Bloomfield