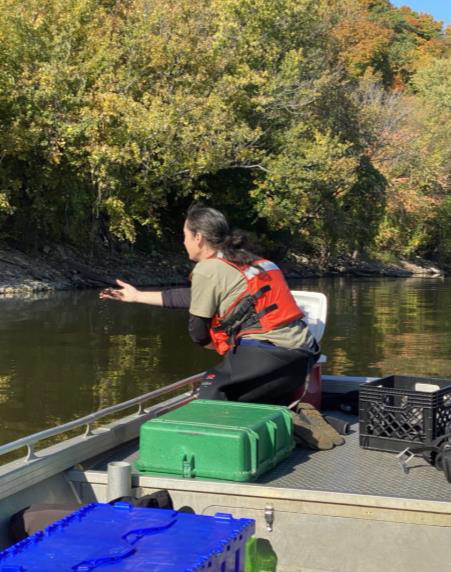 (Right) Mussels are distributed across known mussel habitat (a mussel bed) at the stocking site. Photos by Beth Glidewell  USFWS.

While not many aspects of 2020 have been “normal”, we have been lucky to have historically average water levels on the Upper Mississippi River. Conditions have remained favorable for releasing juvenile mussels well into the fall months, so we were able to do a second round of stocking of hatchery reared juvenile mussels to a site near Guttenberg, Iowa this October. Several hundred black sandshell juveniles and plain pocketbook mussels had grown enough over the summer in the MARS trailer to be of stocking size –longer than about 15mm, which will increase their likelihood of survival when released into the natural mussel bed in the river. The juveniles were tagged with a glue dot so they can be recognized as hatchery reared juveniles (though produced from wild parents) during future survey efforts. Stocking juvenile mussels in the fall still allows them time to settle in and get safely burrowed in the sediment before winter and the spring’s high water levels, then be ready to grow as soon as the waters warm in the spring.

A large group of juvenile mussels were stocked to this location earlier in the summer in collaboration with Iowa DNR. While at this location, we were also able to SCUBA dive and collect broodstock- primarily Hickory Nut mussels- for next year’s propagation efforts. We’ll hold these broodstock animals over the winter at GNFH, use their larvae to inoculate host fish in the spring, and in a couple of years, have juvenile mussels to release and further improve the mussel bed at Guttenberg.