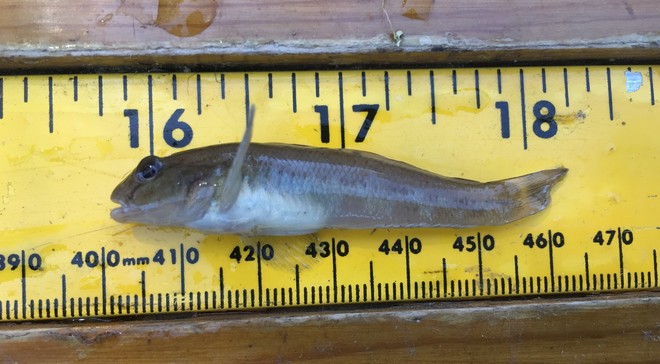 Round goby on measuring board after capture by bottom trawl in the Illinois River. Credit: USFWS

Small, aggressive, maybe even a little bit cute, round goby are not a new face in the world of invasive fish, but recent captures have sparked concerns about a potential new wave of invasion. While not as apparently detrimental to riverine ecosystems as other invasive fish, like silver carp, round goby are feisty fiends that may outcompete native fish for food and spawning habitats. Their populations have the potential to grow rapidly where they establish which has had deleterious effects on native fauna in some areas, especially on those fauna that occupy a similar niche.

Native to Eurasia, round goby have been found in the United States for nearly three decades. First observed in the St. Claire River in 1990, they quickly expanded to more distant reaches of the Great Lakes region, showing up in the Chicago Area Waterway System (CAWS) by 1992. From this time, the U.S. Fish and Wildlife Service has lead an annual effort to monitor this particular invasion front as they have moved from the CAWS downstream along the Illinois River towards the Mississippi River and the country’s interior. Recently, in 2018, a round goby was documented for the first time in the main stem of the Mississippi River near its confluence with the Illinois River, a short boat ride upstream of St. Louis, MO. Round goby were found there again in 2019.

With their, perhaps inevitable, advancement into the Mississippi River comes an onslaught of questions and concerns for river managers. Could a population of round goby take hold in this big river? Will the diversity and habitat complexity, or even the system of locks and dams, help stifle further advancement? What about the hundreds of tributaries with connections to headwater streams? Although not without obstacles, the Mississippi River provides an avenue of new real-estate for this accomplished invader to explore. What are we going to do about it?

To learn more about round goby and their advancement in the United States, visit fact sheet