↓
Home Menu ↓
Skip to primary content
Skip to secondary content
Home→News→Keep Your Eye on the Prize: Continuing restoration of Higgins’Eye pearlymussel to the Chippewa River 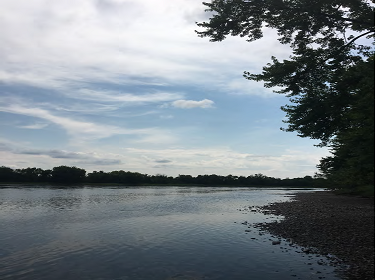 One of the objectives at Genoa National Fish Hatchery is restoring species, whether that be to levels needed for recreation or to recover a species from endangerment. If you’ve taken a tour of the hatchery, walked through the new interpretive center or spent some time talking with or volunteering with our biologists you’ve probably heard of the Higgins’Eye pearlymussel. This is a mussel species that was one of the first listed as endangered in 1983, and the hatchery has been involved with its recovery for more than 15 years, rearing the species in cages, in the Mobile Aquatic Rearing System and in SUPSYs. But beginning in 2017, biologists from the hatchery partnered with other USFWS and WI DNR biologists to identify reaches of the Chippewa river (photo above on right) where the species can be restored, following many decades of absence. Many days were spent boating, snorkeling and diving looking for surrogate species that live in similar habitats and that use the same hosts to find the best places to start. 2017 saw the first reintroduction of the species into the Chippewa, when 3,000 tagged mussels (photo above on left) were carefully placed into the substrate of the river and August 2018 saw a similar release, expanding the species range in the river by more than 5 miles. Now, these 6,000 mussels may seem like a very small drop in the bucket of species recovery, but this new pop-ulation, free from the risk of zebra mussels, moves the species closer to the possibility of recovery, especially as three additional sites are targeted for its reintroduction over the next 5 years.