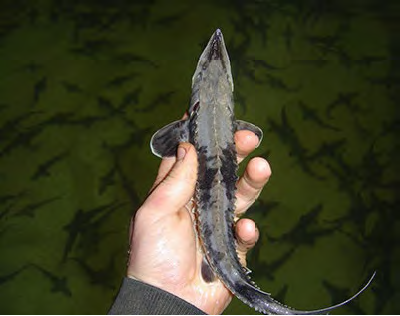 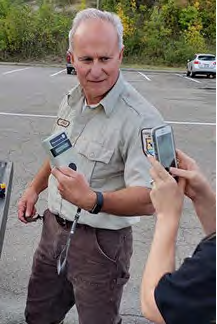 Every fall tens of thousands of lake sturgeon depart their temporary home at the Genoa National Fish Hatchery (NFH) and begin their lives out in the wild, beginning the long process of maturing into 20 plus year old fish that are capable of reproducing on their own.  Lake sturgeon populations have been severely reduced throughout their native range the past century due to human influenced effects such as over harvest, dam construction blocking spawning   migrations, and degraded water quality. This year two far off restorations took hatchery crew over 500-1000 miles away in order to restore this intriguing species to two river systems within its native range. Genoa NFH was part of a cooperative effort to return lake sturgeon to the Maumee River, Ohio for the first time since they disappeared from the system in the mid 1900’s. This October, 2,400 fingerling lake sturgeon were transported the 9.5 hours to Toledo, Ohio where they were part of the first release ceremony in a cooperative release effort with the Toledo Zoo.
The fish were tagged with a PIT tag, or Passive Integrated Transponder tag, that transmits a unique tag number to an electronic reader when scanned, much the same as a tag that may be used to tag domestic house pets. They were then
released safely into the waters of the Maumee. The next week, over 12,000 fingerling lake sturgeon were transported over 1,000 miles away to assist the New York Department of Environmental Conservation’s sturgeon restoration efforts. This year the waters of New York benefited by having another year class of lake sturgeon to grow and thrive in the St. Lawrence River, New York and Lake Ontario watersheds. These multiple year restoration programs ensure that lake sturgeon population numbers and genetic diversity are at levels that can begin to rebuild populations naturally once these long lived species begin to multiply on their own again. In these instances, long range partnerships provide great dividends for natural resource conservation in two distant states.