Hatchery biologists have spent the last several weeks preparing juvenile mussels of several species for release into the Mississippi River near Guttenberg, Iowa. This is stocking event is part of a multi-year effort to restore the mussel population in an area of the river that suffered severe impacts from a train derailment. Black Sandshell, Yellow Sandshell, Plain Pocketbook, Washboard, and Higgins Eye mussels were propagated at Genoa NFH, and have been reared at the hatchery, in the MARS ‘mussel trailer’ and in submerged containers in the Dubuque Ice Harbor (in collaboration with the National Mississippi River Museum) for the last 2- 3 years.
With high water for much of last fall, we and our Iowa DNR partners were not able to stock juvenile mussels at the site during 2019. This summer, with good river conditions the juvenile mussels were ready for the river after spending an additional winter and spring in the mussel building at Genoa NFH (the mussel biologists were also ready for the several thousand, rapidly growing juvenile mussels to go to the river!).
Prior to release, juvenile mussels are marked or tagged so future monitoring efforts can determine if a mussel was propagated or has resulted from natural reproduction or is an animal that has moved into the target area from surrounding areas. A colored super glue dot is added to one or both valves of the shell for most species, or in the case of Federally Endangered Higgins Eye mussels, a tag with a unique number is glued to the shell. When all of the mussels were counted and tagged, they were loaded up into big transport coolers, taken to Guttenberg, transferred to biologists from the Iowa DNR, and released into the Mississippi River. Hopefully the little mussels will settle in and help establish a healthy, stable mussel bed for years to come.
By Beth Glidewell 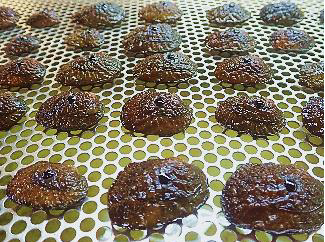 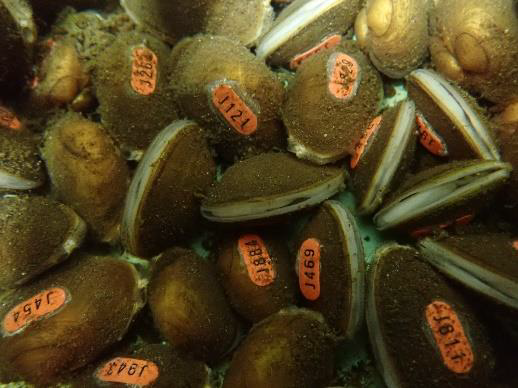 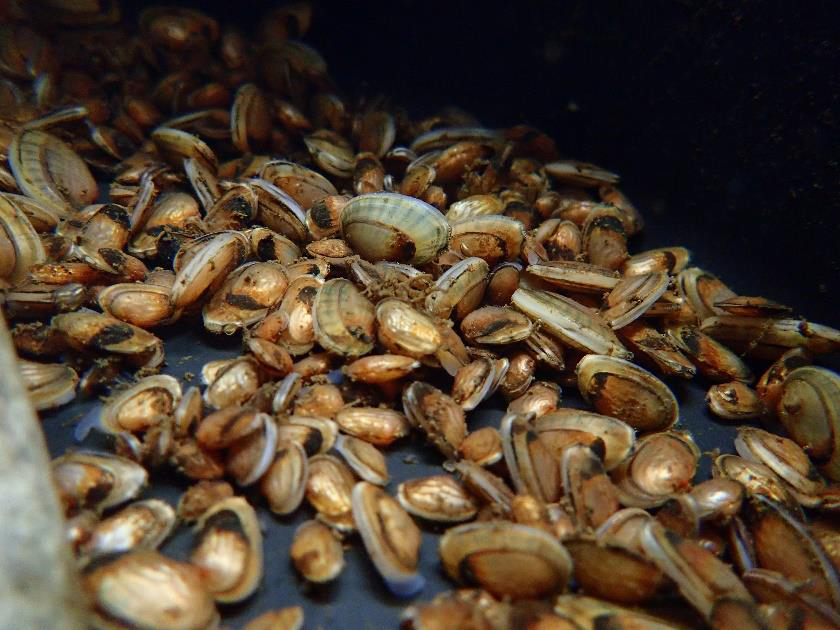 Pocketbook juveniles laid out for glue dot tagging prior to release in the Mississippi River near Guttenberg, Iowa. USFWS photos.