A new U.S. Geological Survey study, using data collected at national wildlife refuges and other sites, found a steep drop in the numbers of frogs, toads and salamanders across the country. The study shows widespread species declines even in protected areas such as refuges.

“Amphibians have been a constant presence in our planet’s ponds, streams, lakes and rivers for 350 million years or so, surviving countless changes that caused many other groups of animals to go extinct,” said USGS Director Suzette Kimball. “This is why the findings of this study are so noteworthy; they demonstrate that the pressures amphibians now face exceed the ability of many of these survivors to cope.”

The study found declines even in species presumed to be relatively stable and widespread. Declines were documented nationwide, from the swamps in Louisiana and Florida to the high mountains of the Sierras and the Rockies.

“Even though these declines seem small on the surface, they are not,” said USGS ecologist Michael Adams, the lead author of the study. “Small numbers build up to dramatic declines with time. We knew there was a big problem with amphibians, but these numbers are both surprising and of significant concern.”

The study did not evaluate causes of decline, but researchers speculated disease and climate warming were among contributing factors. The decline in amphibian numbers affects humans because amphibians control pests, provide medicines, feed other animals and help make ecosystems work. 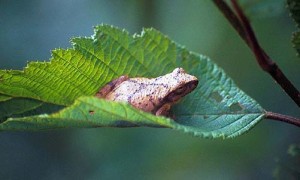 This spring peeper frog is sitting on a leaf at West Virginia’s Canaan Valley National Wildlife Refuge, one of 10 refuges involved in the study. (Ken Sturm/USFWS)