An exciting offshoot of the Genoa National Fish Hatchery (GNFH) role in the Maumee River (OH) Lake Sturgeon restoration work is to be able to contribute fish to Michigan’s Lake Huron basin restoration program in cooperation with the Michigan DNR. Lake sturgeon are broadcast spawners, meaning they literally release hundreds of thousands of eggs per female in order to achieve reproductive success. This is due to the many predators that wait for a meal of sturgeon eggs every spring. Due to this large number of eggs that are released, spawning crews generally take more eggs than needed from specific females in order to maintain strain specific restoration programs.
This has specifically paid benefits on the western shore of Lake Huron where the GNFH joins forces with many partners such as the Michigan DNR, the Ontario Ministry of Natural Resources and Forestry, Alpena Fish and Wildlife Conservation Office and others to collect eggs annually from fish captured in the Upper St. Clair River. The fish are held and eggs collected at a local commercial fishery that graciously allows us to use their holding facilities to restore this species to the Great Lakes watershed. In the years 2017, 2018 and 2019 a total of 2,059 Lake Sturgeon fingerlings were stocked into tributaries which flow into the Saginaw Bay area in Lake Huron.
These efforts are already producing results with fish being captured and released in waters devoid of sturgeon for the last 100 years. This after only a stocking effort of 3 year classes and a little over 2,000 fingerlings! We hope to contribute many more year classes and their important genetic contribution in order to ensure both adequate numbers of fish are able to sustain the new population, and significant amount of genetic variation is available for the population to remain viable. However, it is heartening that although such a small number of fish were released, they are already being seen and documented in habitat that has been devoid of the species. We find hope that this is a sure sign that our efforts and the efforts of our partners have a hand in the return of this magnificent species.
By Doug Aloisi 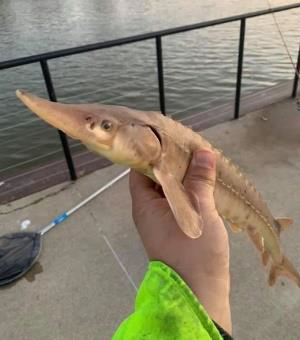 An angler holds lake sturgeon caught in the Saginaw River. Fish was released