When March creeps into April and water temperatures begin warming up from the spring snow melts of low to mid 30’s F. to the high 40’s a bustle of activity occurs amongst sturgeon squeezers.  Annual spawning migrations occur during these times and spawning begins in earnest when water temperatures warm up to 52 F and beyond.  Genoa National Fish Hatchery takes sturgeon eggs from smaller river systems such as the Wolf River in Wisconsin, to the larger systems such as the St. Clair River system in Michigan and the St. Lawrence River system in New York.  These eggs from different river systems are used to grow and release 6-7 inch fingerling lake sturgeon in restoration programs from as far south as Tennessee and Georgia, to Missouri, Minnesota and New York.   Some more good news was received this past week from the Georgia Department of Natural Resources.  The first lake sturgeon spawning activity was witnessed from an over 20 year multi-agency reintroduction!  It was the first lake sturgeon spawning in over 70 years in the state of Georgia.  These fish were more than likely progeny of eggs that were taken from the Wolf River and transferred from the Wisconsin Department of Natural Resources to the U.S Fish and Wildlife Service and Georgia DNR hatcheries to rear fingerlings and release in Georgia.  A few short years ago Missouri also witnessed lake sturgeon spawning in the Mississippi River for the first time in many years as a result of a long term restoration program that Genoa has participated in since 2004.   We look forward every year to the spring egg collections as it gives us the unique opportunity to work with old friends and new in the conservation field in order to work on a fish that can leave a lasting legacy on the landscape.  The fish that we stock tomorrow could live up to 150 years into the future, hopefully creating many more offspring to replace themselves when it is their turn to leave their legacy to others. 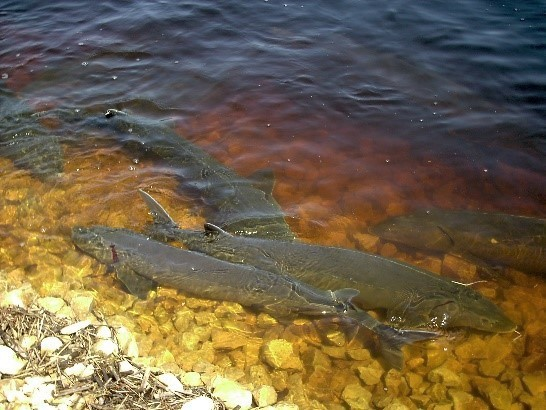 Above: Lake sturgeon congregation during the spawning season. Credit: USFWS