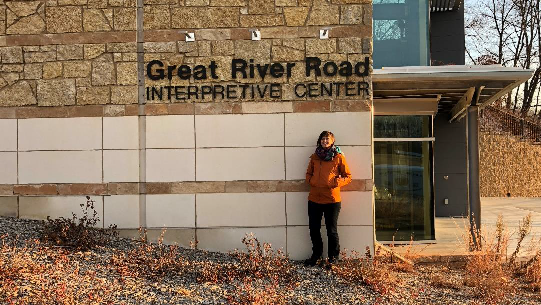 The Genoa hatchery staff is happy to announce that we are now able to staff the Great River Road Interpretive Center this November with former National Park Service Park Ranger Raena Parsons. Raena joins us as our new Environmental Education Specialist. Raena earned her Bachelor’s degree at Eastern Washington University in 2010, and promptly began her federal career as an intern with the Bureau of Land Management. She also interned with the National Park Service at San Juan Island National Historical Park, and became a full time biological technician at the Historical Park in the same year. She also continued her education, earning her Master’s degree in Environmental Education from Western Washington University. Raena, her husband and daughter made the trek east and arrived just before Thanksgiving. She enjoys family activities, outdoor sports such as rock climbing, running and just plain getting outside. You will find Raena in our new Interpretive Center getting acclimated to our ongoing programs and preparing to build upon a conservation legacy in the community and the Upper Mississippi River Region.