Even 2020 is proving to be a good year for mussel production at GNFH. The most exciting moments of any year of production is when we first start seeing new juveniles in our tanks. Since mussels start out so small (<200 ?m), only once they’ve grown to more than a millimeter in length do we have confidence in their survival. A month or so after juveniles are placed in tanks in the Mobile Aquatic Rearing System (MARS), or Mussel Trailer, our biologists find themselves ever so gently feeling along the bottom and edges of the tanks for the tiny pebbles that might be growing juveniles. Sometimes instead of pebbles, when we draw our hands from the water we have mussels attached to our fingers by a web of their byssal threads. This year was no different. After weeks of careful dabbling one day I drew up a tiny Black Sandshell and when I searched the front edge of another tank I found, not the tiny juveniles we usually find, but substantial animals that will be ready for release this fall.
We started the year with Giant Floater production in February. These juveniles grew in plastic shoe boxes in the mussel building until the water warmed enough for the trailer to be deployed. This species grows quickly once the water begins to warm. They reached the size of dimes by mid-July.
Black Sandshell production started later in early June and most of the juveniles went out into ponds at the hatchery still attached the Walleye, but a few fish were held back to see how many juveniles might be in any cage. These juvenile mussels went into the trailer and they’re bigger than the head of a pin, or about a millimeter in length. These tiny animals are growing quickly for their shell thickness. We find that for most species the thinner the shell the more quickly juveniles grow. Black Sandshell produce a substantial shell that allows them to be stable in rocky runs on the Mississippi and tributaries, while the Giant floaters grow in the finer substrates in lower flow areas.
By: Megan Bradley 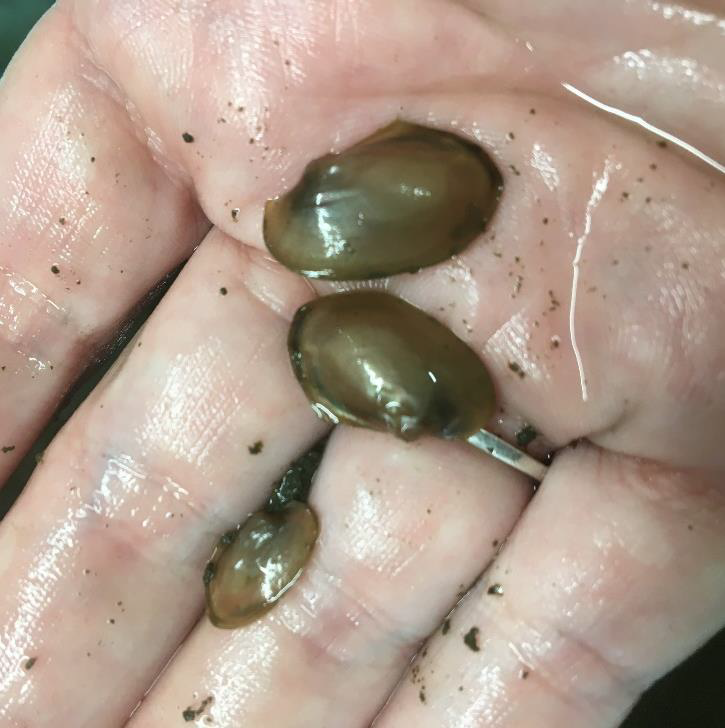 Giant Floater juveniles (dropped off the fish in February 2020), approximately the size of dimes.