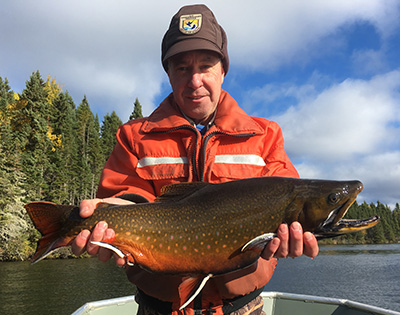 Fish are collected throughout Tobin Harbor using fyke nets placed along the shoreline. Nets are monitored on a daily basis and length, weight, sex and reproductive condition data are collected from all brook trout captured. If the fish are releasing gametes, they are transferred to a temporary holding pen for spawning. Spawning commences once we collect enough ripe adults to meet our target number of families. Milt from males is collected in individual containers and checked under a microscope for sperm motility. This test determines if the milt is active and helps prevent failed fertilization. Approximately 600 eggs are collected from each female, roughly one-half to one quarter of the total produced. After milt and egg collection the fish are released back to the wild. Eggs collected from each female are evenly divided into two batches and each batch is fertilized with milt from one male creating two families per female. 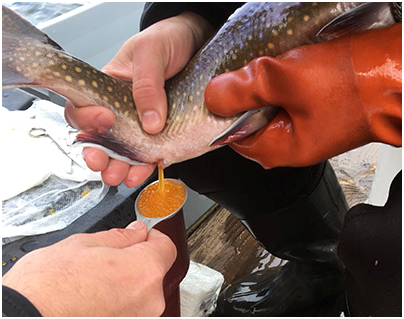 The fertilized eggs are then transported from Isle Royale National Park to an isolation rearing facility at Genoa NFH in Genoa, Wisconsin. There they are incubated and the newly hatched fish raised for 18 months during which time they undergo several fish health inspections by staff at the USFWS La Crosse Fish Health Laboratory in Onalaska, Wisconsin. If the brood class passes three fish health inspections and are confirmed healthy, they are transported to Iron River NFH in Iron River, Wisconsin where they are incorporated into the coaster brook trout brood program to produce offspring for restoration stocking by USFWS and partner fishery agencies in Lake Superior.