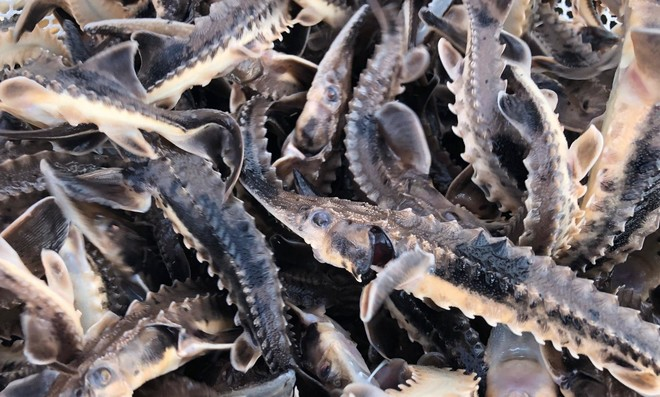 A close up view of fingerling lake sturgeon. Credit: USFWS

In June 2019 hatchery staff, Doug Aloisi and Orey Eckes, aided with the collection of lake sturgeon eggs from wild caught spawning fish below the NYPA dam in Massena, NY. After fertilization, eggs were transported to Genoa NFH and DEC Oneida Hatchery. Sturgeon were fed diets of brine shrimp, bloodworms and krill and were seven inches long by the beginning of October. All sturgeon from Genoa NFH were coded wire tagged, which gives them a batch identification number, allowing resource managers to assess future population growth and survival.

By mid-October sturgeon were ready to make their journey back east. In October 2019 hatchery staff ventured out east with approximately 18,000 tagged lake sturgeon. Upon arrival they were welcomed by local press representatives and staff from USFWS-NYFO, DEC, SMRT, NYPA and USGS. The sturgeon were released into the St. Lawrence River at Ogdensburg and below the NYPA dam in Massena, as well as several larger tributaries. With this cooperative effort among agencies, biologists are hopeful populations of lake sturgeon in the St. Lawrence River may one-day return to historic numbers. Since 2013 when the partnership began 87,500 juvenile lake sturgeon have been stocked. The Genoa NFH staff are looking forward to working with these partners for years to come to establish a growing tradition toward the restoration of lake sturgeon to the St. Lawrence River.