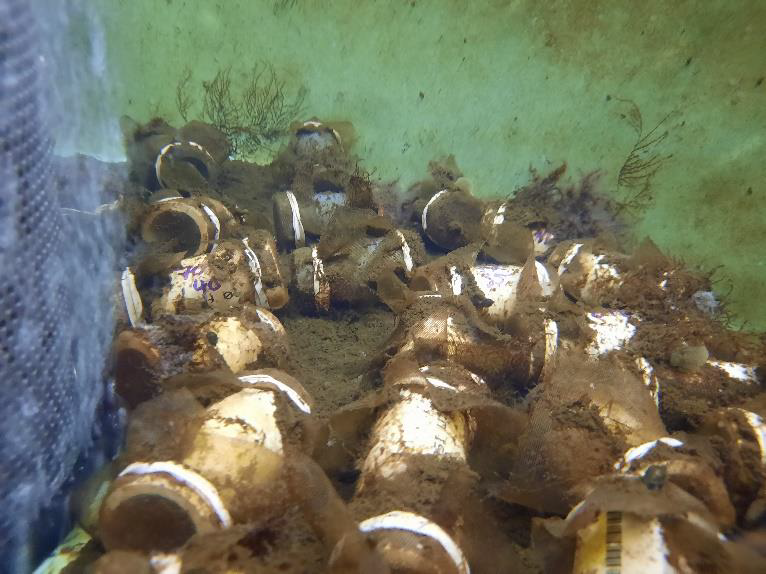 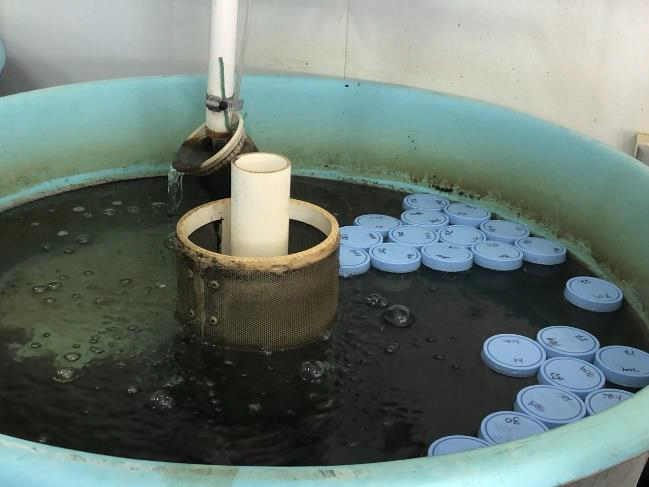 Larvae in culture cups floating in tanks, ready to be packed up for transport.

After spending the growing season in culture tanks in the dragonfly trailer, Hine’s Emerald Dragonfly larvae were checked, photographed for measurement, and packed up for transport during the first week of November. 267 larvae were first placed into pvc tube, mesh screen capped cages in early June. Culture tanks in the trailer allow a fresh supply of pond water and ample zooplankton prey for the larvae, while also creating a semi-controlled culture space where dissolved oxygen, water flow rate and temperature can be monitored and controlled all summer. A mid-season check showed an 81% survival rate for the first stage (cages with 400-500 micron mesh) and an 89% survivorship for second stage cages (the larvae had grown enough that 1mm mesh was sufficient)

The 193 surviving larvae were placed in 100 ml specimen cups for transport. Colleagues from the University of South Dakota (USD) and the Forest Preserve District of DuPage County, IL—partner institutions for the Hine’s Emerald project—came to GNFH and securely packed up the specimen cups for transport back to their institutions for over-winter storage. Water temperatures had dropped to near 40 °F, so larvae had slowed down metabolically and had sufficient oxygen in these cups for transport and will be checked weekly or bi-weekly all winter. Hine’s Emerald larvae typically require several growing seasons to reach a sufficient size that they’ll emerge as adults. These larvae will be cultured for another growing season and their size will be monitored so they can be placed in culture cages that allow both aquatic larval and aerial/perching adult stages well before emergence occurs (the non-aquatic adults very much do not want to be in a mesh cage under water!).
As we said goodbye to one cohort of dragonflies, the next round was arriving. Researchers at USD brought next year’s round of eggs to distribute between GFNH and the Forest Preserve District (with eggs also over-wintering in the USD labs, we’ve got our eggs in 3 baskets…). These eggs will be kept at cold and stable temperatures (3-4°C) until early April, when we’ll begin to warm them and start next year’s hatch.
By: Beth Glidewell