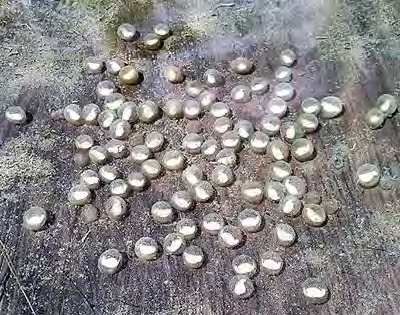 Mudpuppy eggs laid on the under side of a piece of plywood. Credit: USFWS

A mudpuppy ready for use as a salamander mussel host. Credit: USFWS

The salamander mussel is the only North American freshwater mussel that uses something other than a fish as its larval host. The mudpuppy, a large salamander, is the known host of the salamander mussel, and they can be difficult to collect for use in mussel propagation. Through partnerships with the USGS we were able to acquire a population of adult mudpuppy to use as captive broodstock for propagation. In June 2016 we collected eggs from a successful spawn of our captive broodstock in one of the hatchery ponds. We then rolled the eggs in an egg jar as we do for walleye or trout until they hatched. From there the young continued to develop and were given a diet of brine shrimp until they were large enough to eat frozen bloodworms. Their diet has consisted solely of frozen bloodworms ever since, with the exception of a small batch of crayfish after pond harvest last fall.For the last year they have been held in a recirculating system in the mussel building at a constant temperature of 70° Fahrenheit. Over that time the animals have constantly gained about two grams of weight each per month. In fish culture we generally think of weight as the number of fish per pound, and using that metric our mudpuppies are currently at 10 per pound. The reason that we’ve raised this batch of mudpuppy is for them to serve as hosts for propagation of the salamander mussel at Genoa NFH. Salamander mussel glochidia attach to the gills and skin of the mudpuppy and transform from larvae to juveniles over the course of a few weeks in the spring. Last year we felt that the young mudpuppies were too small to serve as effective hosts, but this year they will be the focal point of our restoration efforts. It took a year to gather the broodstock and ultimately two additional years to grow the animals, but now we are ready to take our salamander mussel restoration efforts to the next level. Not all mussel restoration projects take this much planning and effort, but in unique cases it is good to know that we have the ability to solve an issue like access to the suitable host.