The last cohort of mussels produced during the Summer 2021 season – a small cohort of Sheepnose mussels– have just completed development and are dropping off their golden shiner fish hosts in these first weeks of August. Sheepnose broodstock were collected in mid-July from the Chippewa River, and several hundred golden shiners were inoculated with the viable glochidia, or larvae, gathered from the collected females. Sheepnose are ‘short term brooders’ meaning the females don’t retain the mature glochidia for very long, so time is of the essence during propagation season. Water temperatures and river conditions in mid-summer dictate the spawning and then larval development timing, with female Sheepnose holding viable glochidia for a period as short as a couple of weeks. High water flows in the Chippewa prevented Sheepnose broodstock collection during the 2020 season, so we were pleased to find good river conditions for the collection and return of brooding females for this year. 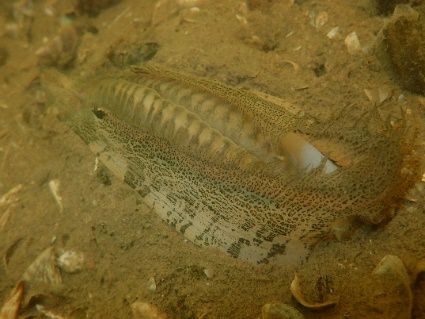 This year’s newly transformed Sheepnose juveniles join cohorts of Black Sandshell, Plain Pocketbook, Hickory Nut, Lilliput, and two large cohorts of Higgin’s Eye juveniles in the MARS trailer, which were produced earlier in the season. These species, in addition to small cohorts of Rock pocketbook and Snuffbox which have been cultured in sediment trays at the mussel building, are all ‘long term brooders’ meaning females hold mature glochidia for longer periods of time, and can be collected sometimes months prior to fish host inoculation and juvenile production. As you can imagine, this makes production scheduling quite a bit easier!

A newly transformed Sheepnose juvenile, viewed under a dissection scope, this juvenile is about 1/3 of a millimeter long. Photo: Beth Glidewell/USFWS.