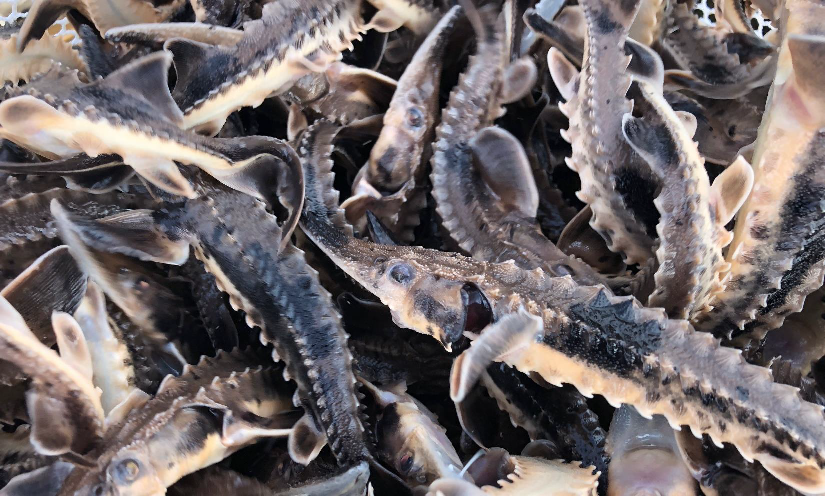 As part of a multi-agency effort (Toledo Zoo, USFWS, USGS, Ohio DNR, Michigan DNR, University of Toledo and Ontario Ministry of Natural Resources and Forestry) lake sturgeon have been released for two consecutive years (as part of a 25-year stocking plan) into the Maumee River, a tributary of Lake Erie. A sturgeon trailer was deployed near the Toledo Zoo in 2018 to raise 1500 lake sturgeon on Maumee River water and for 1500 fish to be reared at Genoa National Fish Hatchery on hatchery supply water. To date 3,000 lake sturgeon have been stocked from the Genoa (WI) National Fish Hatchery. The project calls for paired releases of sturgeon from both locations for 25 years to reach a target self-sustaining population. Once fish are 6-8 inches at both locations, they are tagged with a PIT (passive integrated transponder) tag to monitor future growth, survival and adult returns during spawning. In addition, 40 fish from 2018 and 40 from 2019 were implanted with acoustic transmitters to track juvenile lake sturgeon movement, habitat use, and survival in the Maumee River and migration into Lake Erie. This data will be used to do address questions: 1) Do Lake Sturgeon reared in traditional or stream-side hatchery facilities show similar short-term survival rates after stocking? 2) Do juvenile Lake Sturgeon reared at traditional and stream-side facilities show similar post-release movement behaviors, and what type of habitat do juvenile Lake Sturgeon use after release? The acoustic transmitter project will go into 2020 to address these questions. To date sturgeon released in the Maumee River from both rearing locations (Toledo Zoo and Genoa) have made their way out to the western basin of Lake Erie. Also, an exciting bit of news just reached biologists this fall from a commercial fisherman operating in the western Lake Erie basin. He captured one of the stocked lake sturgeon from the 2018 year class. It had already reached a size of 18+ inches and after checking its PIT tag number, its origin was found to be from the Genoa facility. Pretty exciting news: a lake sturgeon travelled as egg from the east coast of Michigan (St. Clair River, to Wisconsin’s beautiful west coast as a larvae/fingerling (Genoa NFH) to juvenile release in the Maumee River, now traversing as a sub adult in the western basin of Lake Erie. One of our babies is growing up fast and making a name for itself! By: Orey Eckes