↓
Home Menu ↓
Skip to primary content
Skip to secondary content
Home→Uncategorized→Set your mussels free: once you choose the best site

A couple of thousand Fatmucket mussels were recently added to a small creek in downtown Dubuque, IA. Upper Bee Branch is a unique project for freshwater mussel restoration because the stream has, until recently, been covered by concrete and the streets of the city. The National Mississippi River Museum collaborated with the Dubuque County Conservation Board and Genoa National Fish Hatchery to return mussels to this urban creek. Freshwater mussels raised at the hatchery are released into the wild for several reasons; to restore the diversity of a community impacted by historic or recent pollution or physical environmental change, to increase the number or size of a population of an endangered species, or simply to restore their ecosystem services (water filtering) to a stream.
Releasing freshwater mussels is the easy part. They don’t squirm in your net, flip their tails and splash you or hide in the back corner of your stocking tank, however, they’re expert burrowers. This seems like it should make it easier to come back and check on how they’re doing, but unfortunately, this is rarely true. Finding a mussel in the creek is very much like seeking the proverbial needle in the haystack, even a haystack as small as the Upper Bee Branch, which is only a yard or so across. This means that in places where scientists want to regularly assess growth and survival, mussels can’t just be dropped into the stream. In the case of Bee Branch, silos, or concrete mussel containers have been placed out and only a handful of mussels put in a chamber where there’s steady water flow. This means that the mussels won’t be washed downstream in high flow, and they’re easy to find when sought. National Mississippi River Museum staff check on the mussels and measure for growth once a week over the summer to ensure that the creek will support the survival of this returning species. 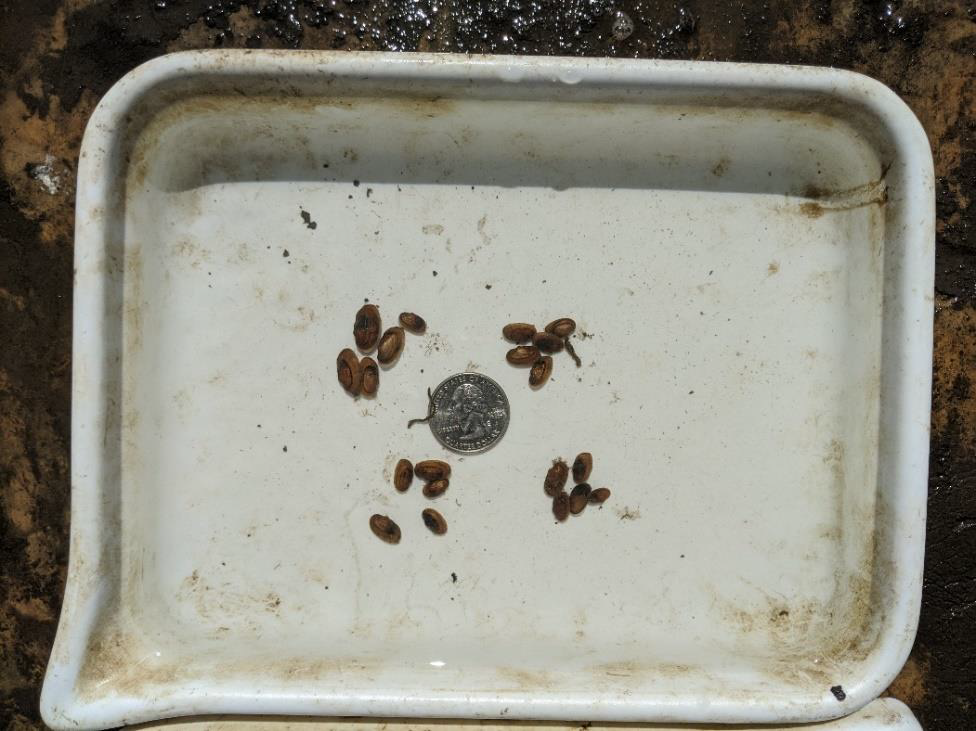 Juvenile Fatmucket mussels ready for deployment into silos in Bee Branch, Dubuque, Iowa. Their size at the end of the growing season will be compared to their early season size (shown here, relative to a quarter). USFWS photo